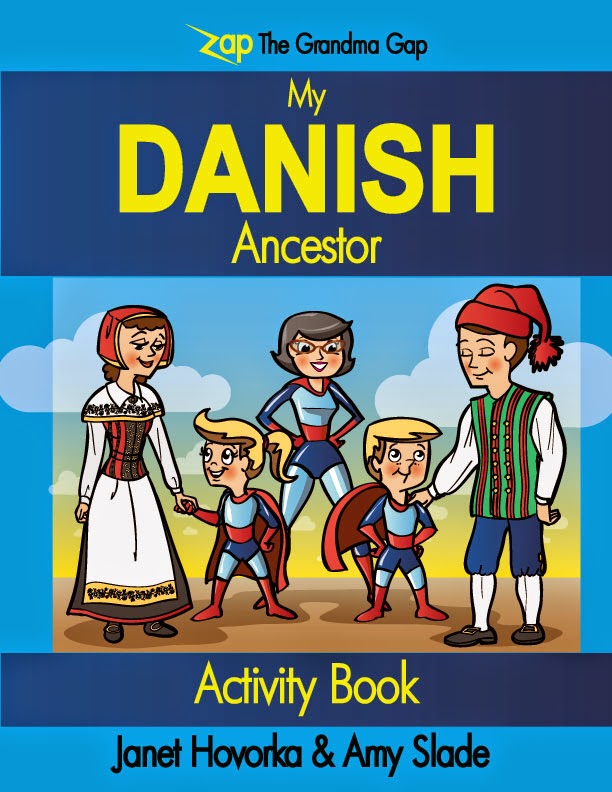 I am so excited to announce our brand new My Danish Ancestor Activity Book.  This 52-page activity book encourages youth to ask questions and delve into the Danish history of their family in a fun way. The “My Ancestors” hands-on workbooks create bonds between generations with hours of activities, puzzles, games, recipes, stories and crafts that can involve the entire family. Timelines, paper dolls, coloring pages, maps, music, dot-to-dots and crossword puzzles combine to give youth ownership of their own genealogy and the send them on a quest to bring their family history to life.

As I've said before, studies have shown that greater knowledge about family history strengthens and empowers youth by creating self-esteem, resilience and a greater sense of control over their lives. Learning about the family's past also strengthens the relationships between living family members by creating a shared experience and core identity that no one else in the world can duplicate.  This new children’s workbook is designed to help kids gain the benefits of family history and start asking their family members about their shared past.

I have a particularly inspiring Danish ancestor and I'm excited to share this book with my children and someday with my grandchildren.  But beyond that, this was our most requested book.  These are activities, games, and questions that will help you discover the exciting lives of your Danish Ancestors. You can:

No matter what your age, you can help your family accomplish these activities together. As you learn, you can record your family history here to create a new family keepsake and pass your great Danish heritage down to future generations. 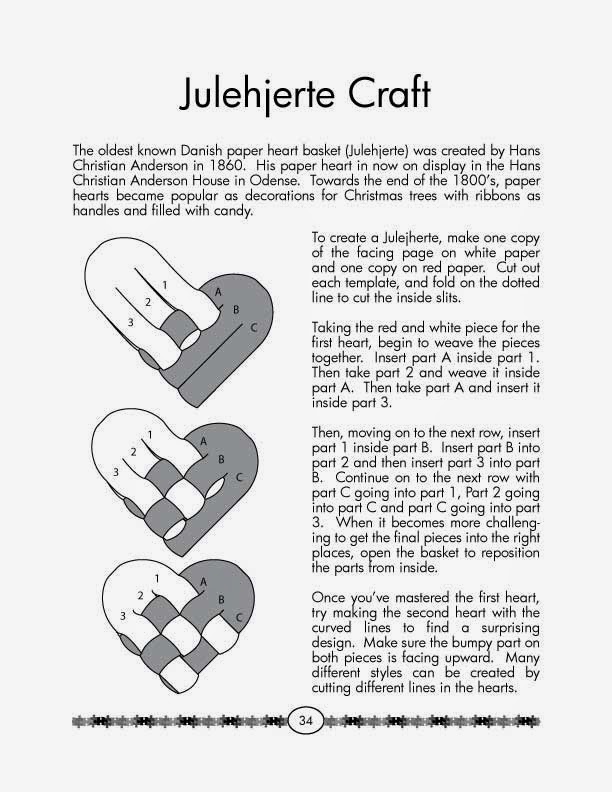 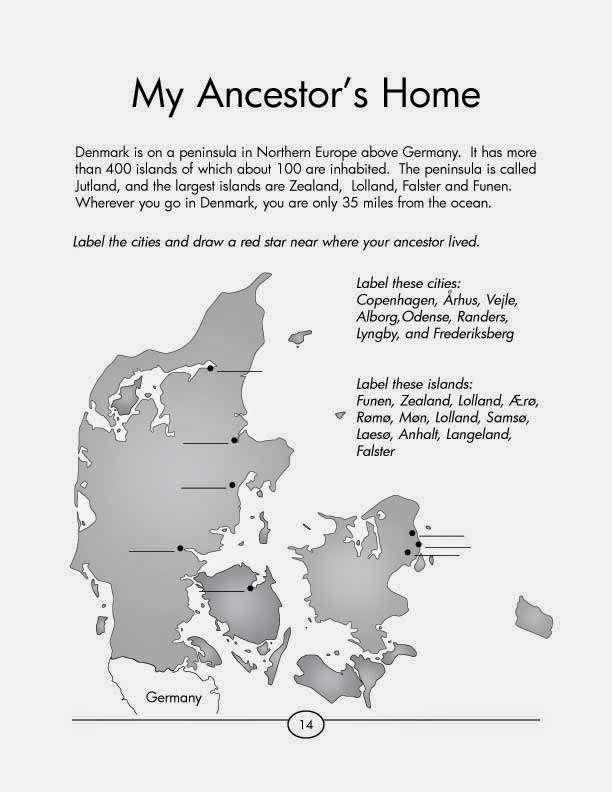 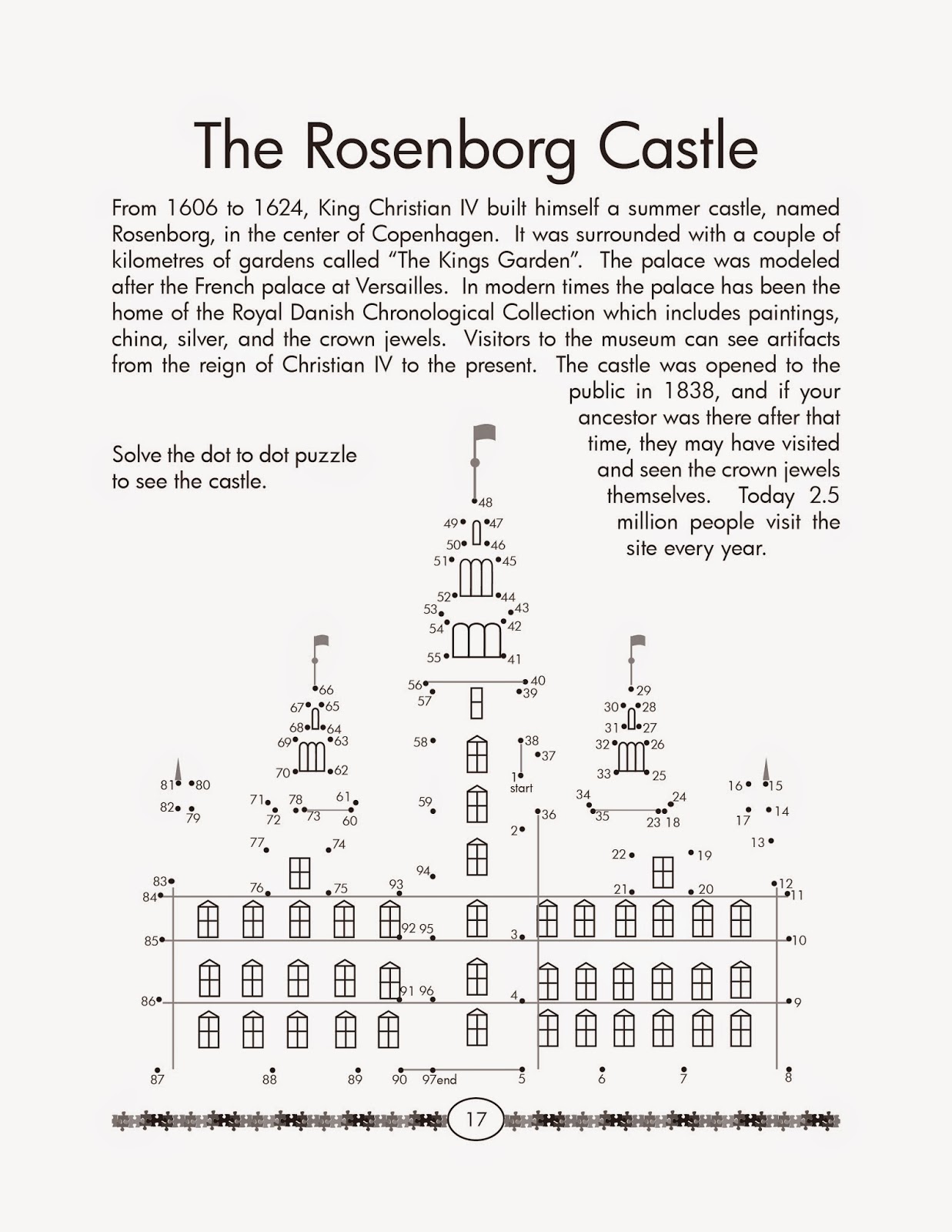 You can purchase this book now, through our website.  We'll also have plenty of copies on hand  at Rootstech.  Either way, you cannot go wrong when you use these books to introduce your children and grandchildren to your Danish heritage.

Posted by Janet Hovorka at 3:56 PM No comments:

Up the Game for Your Next Family Reunion

We do family reunions like no one else.  You want the "WOW" factor at the next one you're in charge of?  Contact us, we've got you covered.  With all manner of custom printed charts, we are your go-to resource for working charts (great for gathering information and editing incorrect data) or center piece custom designed display charts.  We have also gathered plenty of tried and tested family reunion ideas for you over the years that you can take a look at here and here.  And now, to top all of that, we at Family ChartMasters have created a brand new game for you to play with family members anytime you want to create moments for making family connections! 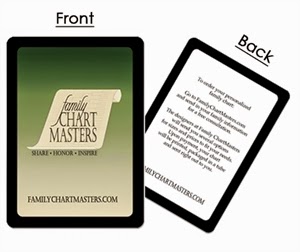 We are very pleased to introduce you to our Family ChartMasters Pedigree Challenge Card Game.  A full deck of professionally crafted cards that will have conversations buzzing and family chart hunting happening within seconds.  Here are a few examples of some of the narrative builders included in this fun deck of cards: 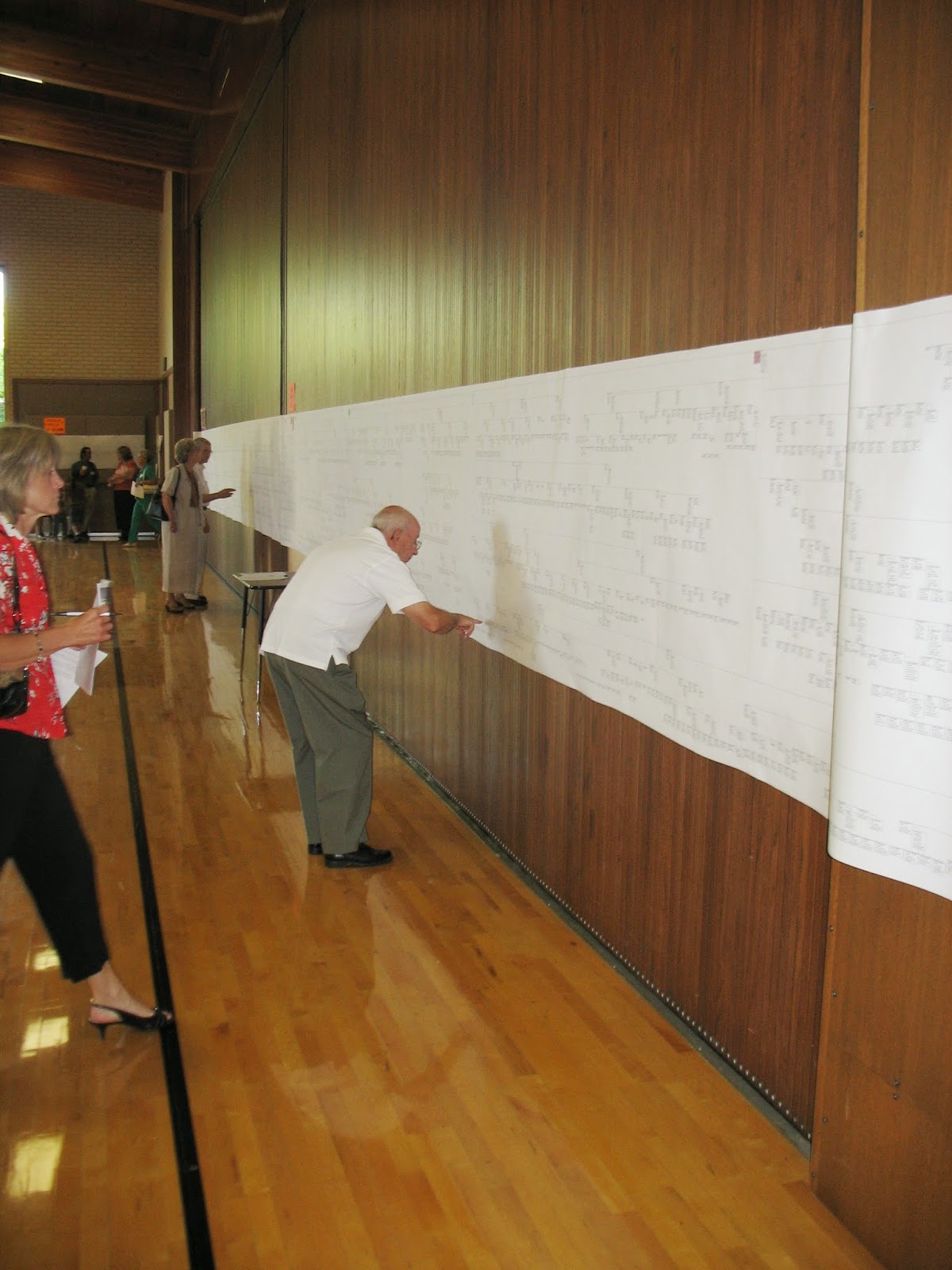 As you can see, these cards will work in large groups (great for mingling at those large extended family reunions) or in smaller gatherings (use with your custom made Family ChartMasters family chart and utilize the beautifully displayed information to create stronger bonds).  These cards can come out any time of year.  For grand holidays (can you imagine the stories that will fly over the carved turkey?) or for quick visits from grandchildren, nieces, or nephews (what a fun way to pass time while arming young ones with family history power).  The cards have so many applications and uses, you'll be glad you have them on hand.

You can purchase this deck of cards now, through our website, for just $10.  It's a real bargain for all of the bonding and sharing that will result from it.  Or, if you will be at Rootstech next week, stop by Booth 1240 to say "hello" and pick up a fresh deck for you or another family reunion planning friend you may know.  That will also give you a great chance to check out some of the games we'll be playing at our booth (1240), as well as another family history centered board game geared more towards smaller gatherings.  You can take a look at the cards yourself and give them a try with any of our displayed charts, to see how fun and addictive the chart treasure hunting can become.  Trust us on this one, we know family reunions and you will want this game at your next one!
Posted by Janet Hovorka at 3:38 PM No comments:

He Knew Where He Came From

And that is just one of the many reasons genealogists across the board absolutely adore James Herschel Taylor.  James was recently featured on the PBS show Genealogy Roadshow (The St. Louis Central Library episode which aired Monday, January 19th, 2015) and he captured everyone's attention and hearts.  Josh Taylor and the producers reached out to us, at Family ChartMasters, to create a chart for this young man and you can read about that here.  What I'd like to focus on in this post, however, is more about how James knew where he was descended from before the research and DNA testing was done to show him a more complete view of his ancestry.

If you take a look at his story on the Genealogy Roadshow website (you can find his segment roughly between the 33:17 and 42:43 minute markers), James talks about where many African Americans have roots and ancestry.  He talks about how much he hopes his ancestry leads him to West Africa with Nigerian ties, and how much he wants to be from the Mali Empire (because they were an educated and highly organized empire... seriously,  this kid!).  He goes on to say some profound statements.  He says on the show segment about why he wants to know where he comes from and it's along the lines of it being because it would "Bring me honor and bring my family honor."  He then goes on to say how he wants to know where his ancestors and history are because "It would give me better self-esteem and self-standing."  Honestly, if you have not watched the show, go watch it.  He's so amazing!  He said, in just a sentence, what I have been saying and teaching for years to people much older and with much more life experience than him.  And he gets it!  How incredible.

One thing that really jumped out to me was that his DNA findings revealed his family ancestry derives from exactly where he hoped it would.  All I could think of was that he wanted to be from the Mali Empire in West Africa *because* that is where he is actually from.  He felt that connection in himself and he was drawn to that region and had a need to learn and discover what he could about that Empire because it was his.  We talk about feeling pulled or "just knowing" something within us about our ancestry and James is the perfect example of it.  He even said, after Josh Taylor presented the findings to him, "My brain just wants to jump out of my head and say 'That's what I told you! I knew where you were from!'"  And that's the whole point.  He knew because that ancestry was in him, pulling him to discover more about his roots and his foundation.  James is the perfect example of heeding that call and pull we all feel when we think of our histories.

Working on a chart for him and his family, and then being able to see it presented to him on the show is just the icing on the cake to this story.  The real joy is that James had a desire to find his ancestry and to know exactly where he came from.  He that pull felt within him and then the research proved he was right.  And if you look at that sweet boy's face on the video, there is no doubt that his self-esteem and self-standing just shot through the roof when he discovered his feelings were right all along.  Talk about a successful perspective story right there!  What a great kid and what a great story!
Posted by Janet Hovorka at 2:37 PM No comments: