So the whole family got to go see Elaine Dalton's devotional at RootsTech last weekend.  It was great for us that the exhibitor's hall closed so early in the afternoon.  We were able to get everything packed up, go have a nice dinner together and listen to my teenagers talk about the sessions they went to in the afternoon, and then all go together to listen to the devotional.  It was some great family time together--a sweet benefit to doing family history together.  As always, Family History strengthens those bonds between family members. 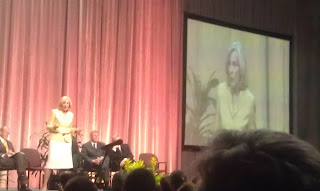 I knew we were in for a treat.  Elaine Dalton is a wonderful, genuine, beautiful lady.  She holds the calling in the LDS church of the general leader over all LDS Young Women ages 12-18.  She is called the Young Women's General President.  As such, she travels all over the world speaking to youth groups.  I was very honored a couple of weeks ago when she sent me a personal letter saying that she loved my Zap The Grandma Gap books and that she would be using them with her grandchildren.  I know she is busy, but I know family history and her own family are very important to her. 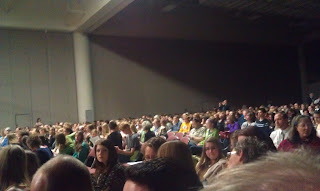 She compared the almost two thousand youth in attendance to the 2,000 Stripling Warriors.  In the Book of Mormon (considered as scripture to the LDS church) there is a story about 2,000 young men who fought to save their families.  In the story, the families of the young men had lived for generations at war with the people of God.  When their parents were converted to the truth, they made an oath to never take up weapons again in pennance for their past wrongs.  Many of the fathers of these 2,000 young men were killed by their enemies because they were true to their oath and wouldn't go back to fighting.  What was left of their community--mostly the young children and their mothers--went to live with other people who shared their same faith in God.  Their new neighbors knew of the oath and wanted to support their commitment to God.  The new neighbors promised to protect them in the continual wars that were going on.  But as the years went on, the wars were increasingly severe and it took a great toll on the people.  When their survival was at stake, 2,000 of their young men--young enough that they had not taken the oath that their parents had taken--offered to go to war to protect their families.  They chose a prophet to be their leader and they went out to fight.  The book says "they never had fought, yet they did not fear death; and they did think more upon the liberty of their fathers than they did upon their lives; yea, they had been taught by their mothers, that if they did not doubt, God would deliver them."  These 2,000 young men were then protected and not one of them lost their lives in the fighting.  They proved crucial to winning the war.

I thought this was a brilliant analogy and I was so moved sitting in the middle of all these teenagers listening to her talk.  Like I write in the books, I honestly believe family history could save the world from so many of the social ills that we see today.  I believe it helps young people have the scaffolding to grow up to be strong, purposeful adults with a healthy sense of self.  I believe it saves families.  And as young people today get involved in family history it does save their families.  As the New York Times, the Huffington Post and etc have been talking about as of late--family history--having that family narrative is a strong team building exercise that is the strongest thing you can use to create good relationships in your family.

Sister Dalton was very forthright in her religious convictions about the importance of family history for youth.  She said "When the Lord has something important to do He often asks the youth to do it."  She cited the examples of Mormon, another Book of Mormon figure who was called to the ministry at only 15.  And she talked of Joseph Smith, the modern day prophet who started the LDS church and was called of God at the age of 14.  She said that she believed that mobile devices had been developed so that this generation would be able to do family history.  And I really appreciated her leadership in saying, "I will never ask you to start doing what I'm not doing."  She told them that you can't be a leader unless you are out in front doing it.  So she promised them that she would be on the computer doing it too--and she told them she might be calling them for some help.  :)

She talked about an initiative in one area of the church (I'm sorry I missed the location) where a few youth were taught about how to research their family history and then each of them went and taught another young person how to do it.  Each of them in turn went and taught another person.  She joked that it works best when the girls were inviting boys.  "Talk about binding hearts together."  :)  She asked each of the youth in attendance to go out and teach another young person about family history. As you can see by my other posts about what what my kids thought about RootsTech, that would definitely help with my own family.  There is some sort of disconnect when adults are talking about it.  My teenagers resonate best with other teenagers teaching how to do it.

It was a great presentation.  I left all inspired and I think the kids caught a bit of inspiration too.  You can read more of Sister Dalton's instructions to LDS youth about family history here.
Posted by Janet Hovorka at 7:00 AM