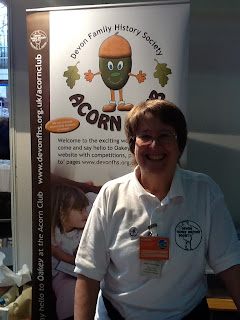 I have to tell you about the most wonderful resource in Great Britain that I learned about last year but then had a chance to reconnect with a couple of weeks ago when I was speaking and showing off the new book at Who Do You Think You Are Live. The Devon County Family History Society has developed some wonderful resources for the youth in that area. They have a program called the Acorn club that they take into local schools to teach children about family history. It must be a Janet thing--Janet Few and Janet Henwood and several other people not named Janet ;) have developed online resources you can see at http://www.devonfhs.org.uk/acornclub They have promised to put up more of the resources they have developed so that others can use them to inspire the children in their lives.

They let me take a few snapshots of the packet have for the children they work with. 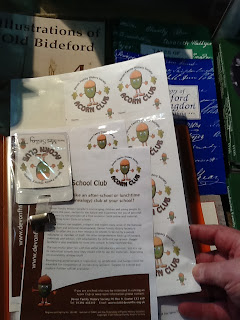 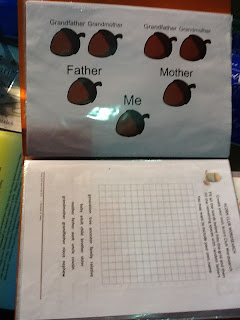 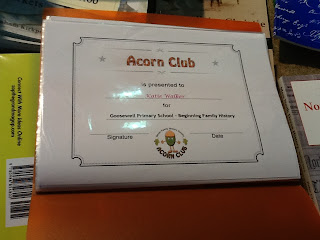 It was a wonderful packet of resources for the kids. They have done such a fantastic job of assembling resources and I'm so glad they are willing to share. 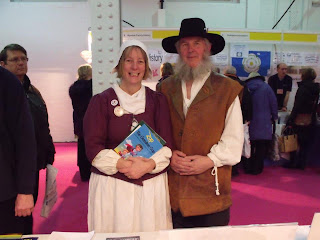 I also had a wonderful talk with Chris Braund about the work he and Janet Few do in schools with living history. They go in as 17th century people and teach kids about what life was like. They make them do the washing up, but first they have to haul the water, chop the wood to heat the water, etc. and it is so eye opening to kids. Just like in my recent Family Tree Magazine article, when you actually live it you learn so much that you never would have supposed by only studying history. It teaches such a great perspective and attitude of gratitude to kids. I wish they could come teach in our schools.

I had some great discussions with Chris and Janet about how families are changing and how tricky it is on a school level to teach children about the family. Chris thinks things dramatically changed with the advent of television and I think he is right. Families used to talk more about their history and about themselves and numerous generations used to live closer--sometimes even under one roof. Now we are not only spread out more but mealtimes are spent in front of the television instead of talking to each other.

On top of that, we talked about how families have changed so that when you start talking about a child's family structure in school it is kind of tough. They've had challenges with children having a hard time distinguishing between multiple step families and live in lover's families. So with the Acorn Society they often start with surnames. Even that has been problematic at times with changing families but it seems to work best. And then they move on to all sorts of other fun things.

That illustrates exactly why children need to know about their history so much. Even in cases where the last couple of generations have made messes, family history teaches a child about the people before. And they can proceed forward into the future with greater understanding and a greater sense of who they are. So go check out what the Acorn club is doing.

And perhaps you could start a club in your school.
Posted by Janet Hovorka at 9:30 AM