Another day full of family history

So today we set out on another adventure, this time with my parents coming along as well.  These are my Dad's patriarchal family lines so he had to come along with us.  We headed out to Gravesend to see if we could find some of the family sites for the generations who lived near London, just before they immigrated to the U.S.

If you clicked on the myriad of links I've given you in recent blog posts that point back to The Chart Chick Blog, you'll know that my father's father's father Joseph Hatten Carpenter immigrated from England in 1886.  His father had moved from Taunton to Plymouth where Joseph was born.  Joseph's grandfather was the one who moved the family from Trefusis farm into Taunton.  After Joseph was born, his father became ill so they moved to Gravesend to be closer to his Mother's family.  At times Joseph lived with his paternal grandparents and recently I found a wonderful journal Joseph wrote about the time he spent in England as a child.  It tells all about Joseph's life with his grandparents in Gravesend and how much he enjoyed his time there.  On the way to Gravesend, I read several pages from the journal aloud in the car so that everyone could get a good feel for where we were going.

According to the UK Poll Books and Historical Registers, and the 1841 Census, Joseph's maternal grandfather Joseph Heath Hatton and his family lived at 62 High Street in Gravesend.  Joseph's journal tells us that they moved to 49 Windmill Road, and then to 195 Parrock Street, all within a couple of blocks of each other.  I hadn't scouted out these sites before, so we were heading out to find them without prior experience. 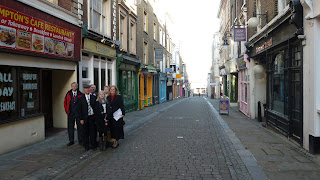 High Street is a beautiful cobblestone road that looks down on the Thames.  They lived over the clothing store.  It is now a restaurant but it still has the apartment above it.  It was fun to watch my Dad get excited.  He knew his grandfather Joseph Hatten Carpenter well so I think it was exciting to see where his childhood had been though he never returned to England once he came to the States. 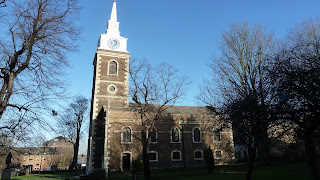 We found the house on Parrock Street where Joseph lived with his grandfather Joseph.  It was a nice home.  Joseph writes about his fond memories of the strawberry patch there.  It is a nice house.  You can see why Joseph was proud that his grandfather was able to retire and live off his means. 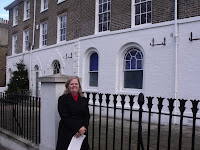 Then at the Windmill Street address we found another surprise.  Joseph writes in his journal that one of his uncles worked as a lawyer.  At Windmill Street in the family home, we found the offices of Hatten and Wyatt law firm.  Founded in 1844 these had to be related but they were closed as this was Sunday.  It was exciting to find them still in the same place that I had found in the census records.

We struck out on a couple of the other sites we were looking for.  And I have a cemetery there that I want to visit on my next trip. 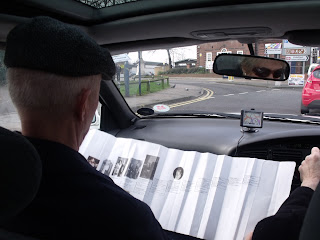 The best part of the whole trip was when Dad was using the pedigree chart we brought to figure out who was who.  "This is a really useful chart."  Yeah Dad.  That's what I do for a living.  LOL.

Posted by Janet Hovorka at 5:00 PM