Ok so it's not that old.

So I said I was having some trouble wrapping my mind around how old things were in England, and how far back my ancestry stretched there.

I had to do a little forehead smack today.  We visited the British Museum and got to see all the Egyptology there.  My bachelor's degree is in ancient Near Eastern history so I have spent alot of time in the Middle East and in Egypt.  Somehow ancient history doesn't seem so distant to me.  I studied Greek and Hebrew and Hieroglyphics and that didn't blow my mind.  So why does the early 1700s seem so far away?  Probably because I can draw a pedigree chart to the 1700s.  I can see the people who lived and died between those times.  But it is much harder to draw a reliable pedigree chart back to ancient Egypt.  At Family ChartMasters we've done some spectacular charts that go way back.  But somehow my mind jumps that gap a little bit. 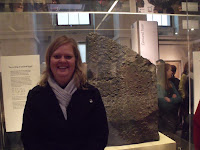 Got to see the Rosetta Stone for the first time today.  Very, very cool for a girl with a Middle Eastern Studies degree.  Almost as cool as her own family history sites.  The kids laughed that I wanted my picture taken with the back of it.  Anyone can see a picture of the front of the Rosetta Stone.  But when you've seen the back, then you've really been there.  :)
Posted by Janet Hovorka at 10:18 PM

Email ThisBlogThis!Share to TwitterShare to FacebookShare to Pinterest
Labels: Perspective