Today we went to Bletchley Park on our way out to the place where my ancestry goes back to the 1600s.  My techie sons wanted to see Bletchley Park--it is the place where British intelligence worked to break the Engima machine codes in World War 2 and in the process laid the groundwork for the invention of the modern computer.  You can learn more about it here, and here. 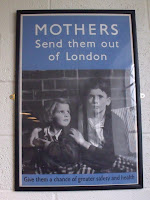 I knew Bletchley Park would be interesting but I was unprepared for how moved I was by this site.  I was so impressed by how hard the work was and the intense dedication they had to this project.  I am so grateful for the workers of Bletchley Park and how they were able to cut the war short by their incredible intelligence.  Both of my Grandfathers may have been pulled into the European conflict had the war gone on and the course of my family would have changed dramatically. I am so thankful for what the British did to stop the Nazis.  I don't think I appreciated that enough previously. 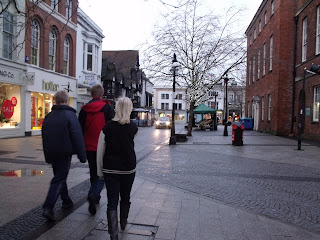 Then we headed down to Bradford on Tone, the site of my Carpenter line's family farm.  We are staying in Taunton tonight, the larger city next to Bradford on Tone.  My ancestor Robert Gibbs Carpenter moved to Taunton when he left the family farm.  The 1841 England Census shows Robert as a grocer on High Street in Taunton.  His son Robert Wright Carpenter, my father's great grandfather was born there.  High street is now a pedestrian mall that only runs about one block so we headed over there tonight for dinner.  I think the kids were quite impressed--like I was earlier.  They were quiet, maybe even reverent.  I'm still looking for the exact address of where they lived, but the kids got their first taste of walking where their ancestors walked.  Good stuff.

Posted by Janet Hovorka at 5:49 AM