So we went to the Victoria and Albert museum today and I learned something about my ancestors.

I knew my Hatton line (Joseph's Hatten Carpenter's mother's line) were drapers in Gravesend.  "Drapers" is such a beautiful word for owning a clothing store.  I also know from his journals that they retired and lived off their wealth for over 20 years and I know from the censuses that they had several servants.  So they must have been fairly successful drapers.  From an American point of view owning a shop makes you a hard living--perhaps blue collar life.  But I knew in England it was a bit different.  I'd seen "Are You Being Served?" on PBS and I know Eliza Doolittle aspired to be a shop girl. 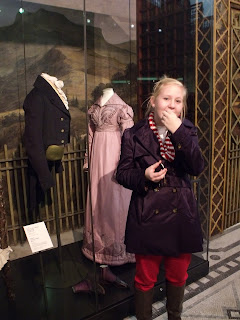 At the Victoria and Albert we found out what a huge deal it is to dress properly in England.  Fashion is a big deal.  I think it comes somewhat from the King's court and the courtiers.  It also told people what your status is.  There was a great exhibit there on historical costume coming down through the ages.  There are many fine clothing shops in London now.  It always has been and still is a great center for fashion.

As my ancestors came to America and then crossed the plains into the western frontier, they picked up a very utilitarian view of clothing.  If you were too into fashion, you were vain.  That flip in attitude had given me a skewed view of what my ancestors did.  But now I think I have a little better perspective.  Perhaps vanity was a virtue. 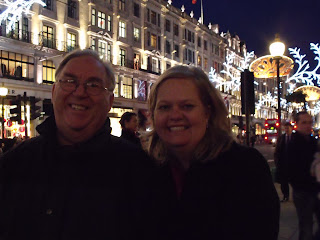 There was also a temporary display of ball gowns there.  Fabulous.  I should have been born in the 50s.  The balls, the debutantes, socializing throughout the season and being presented at court...  Yeah I can see the fashion thing now.  And it is beautiful.

Later we went down to Oxford Street and Regent street to see the Christmas lights.  Beautiful shops, beautiful lights.  I learned something about my ancestors and had a great time.
Posted by Janet Hovorka at 2:37 AM