We had a wonderful Christmas Eve and learned a little more about how our ancestors might have celebrated differently than what we experience now. 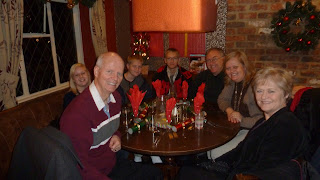 We had dinner at the Peacock Lodge, a regular British Pub.  We had traditional Christmas Crackers.  Since they were only invented in the 1840's it is unlikely that they were widespread enough that my ancestors had them since they left in 1870.  It is funny how something that you think of as so traditional and common can be really not that old.  Anyway, it was fun to put on the hats and read the jokes and celebrate. 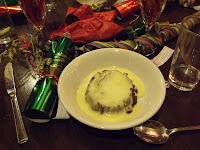 More likely they did have Christmas pudding though.  We've had several versions of Christmas pudding and they are pretty foreign to the American palate.  We have fruitcake which is similar but it is not very common to find someone who appreciates it in the States.  Some Christmas puddings are better than others.  I liked it ok, but it was definitely more of a "have to try it once" thing. 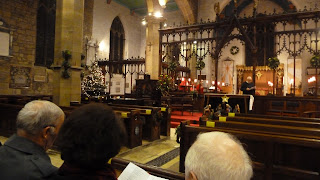 Later that night, Dad and I went to Christmas Mass.  Luckily we got there early enough to snap a quick picture before many people were there.  I didn't try very hard to get the kids to come because I knew it would be hard on them.  They're just starting to get over the jet lag.  A real Church of England Midnight Mass.  My more recent ancestors were Congregationalists, even a Congregationalist minister, but further back they belonged to the Church of England.  It was a beautiful service.  Beautiful music.  A wonderful way to start Christmas.  This church only dated back to 1789 but that's still ancient history where I'm from.  I'm sure the major difference between our experience and our ancestors, was that the Vicar was a woman.  It was nice to see so many people there and it was particularly moving to see the family across the aisle from us--three generations of mothers and daughters coming to church and taking communion together on Christmas. Well connected.
Posted by Janet Hovorka at 5:46 AM